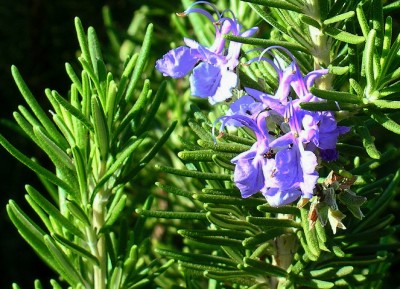 I am a big fan of rosemary. I have several varieties of rosemary plants growing both inside my house and out in my garden. An evergreen shrub-like plant that is native to the Mediterranean, rosemary has a rich, tangy aroma that just connotes a good home-cooked meal to me. Plus, its needle-like leaves display pretty blue flowers in the late winter and early spring.

Rosemary is pretty durable and easy to care for once it has been established, and if you guard it from temperatures that dip below freezing and avoid over-watering, your plant will thrive. Most chefs favor the Tuscan Blue variety of rosemary, but Blue Spires, Spice Island and Miss Jessup’s Upright types are also good for cooking.

Rosemary translates to “dew of the sea” in Latin, and its strong flavor pairs well with roasted meats as well as with garlic and olive oil. It’s a great addition to tomato-based dishes and sauces as well. If you are used to using commercially sold dried rosemary, be aware that fresh rosemary is strong and flavorful, and you will need to adjust your quantities so that your recipes are not overwhelmed with its flavor.

Rosemary contains caffeic acid and its derivative, rosmarinic acid, which has antiviral, anti-inflammatory, antibacterial and antioxidant properties. According to ancient folk tradition, rosemary was thought to improve the memory and was often used at funerals as a way of honoring the memory of the deceased. For example, it is mentioned in Shakespeare’s Hamlet by Ophelia who says “There’s rosemary, that’s for remembrance” and in Act 4 Scene 5 of Romeo and Juliet (“Dry up your tears and stick your rosemary on this fair course.”

You can use rosemary as a fresh herb, a dry herb or as an essential oil. Here are some uses and benefits for this fragrant plant that you may not know about:

1. Pest repellent – Deer and mice don’t like the smell of rosemary, so it can be a deterrent in your garden. Inside your home, you can place sprigs of rosemary in the back of cabinets to ward away mice. Fresh rosemary can work as a mosquito repellent as well. Try rubbing a sprig on your exposed skin when you are outdoors at dusk when mosquitos are active.

2. Air freshener – Get rid of musty odors in your home by simmering a natural air freshener on the stove. Place a handful of rosemary leaves, a slice of lemon, a teaspoon of vanilla and a cup of water in a sauce pan and let it simmer on low to freshen your home. You can also make your own potpourri with rosemary. Dry a handful of rosemary leaves in the sun until all the moisture is gone. Place the dried leaves in a mesh bag for a dresser drawer. You can combine the dried rosemary with dried rose petals if you like.

3. Vitamin source — Rosemary is so rich in vitamin A that just a few leaves a day in the diet would meet the daily requirement. Vitamin A helps in maintaining healthy vision and is useful for the mucus membranes and skin. Fresh rosemary leaves are also a good source of vitamin C, which helps boost immunities, and of B vitamins such as pyridoxine and folic acid. Folic acid is known to help prevent defects of the unborn baby’s brain or spine. A nutritional powerhouse, rosemary also contains iron, calcium, phosphorous, sodium, potassium, zinc, manganese and magnesium. 5. Tumor suppression — An Australian study found that rosemary extract worked to suppress the development of tumors in the colon, breast, liver and stomach.

6. Enhanced concentration – The International Journal of Neuroscience published a study that suggests rosemary can improve alertness. Another study that was published in the Journal of Medicinal Food showed that older adults who consumed a 750 mg dose of rosemary experienced improved memory and cognitive function. A team of British researchers found that study participants who simply smelled fresh rosemary experienced enhanced mental performance.

7. Hair growth – Rosemary has long been thought to help stimulate hair growth. The University of Maryland Medical Center website points to a study of 84 people suffering from alopecia areata (a disease in which hair falls out often in patches). Those participants who massaged their scalps with rosemary oil and other essential oils once a day for a period of seven months experienced significant hair regrowth when compared to those participants who massaged their scalps without the essential oils.

8. Improved digestion – Rosemary also is useful in easing digestion. For a soothing relief of upset stomach, try sipping a simple rosemary tea. Make the tea by boiling a few sprigs of fresh rosemary in fresh water until the water becomes light green in color. Add honey or lemon for taste. This tea also serves to ease muscle pain and can help with general relaxation after a long day.

A few words of caution: Some people are known to be allergic to rosemary applied to the skin. Pregnant women, nursing mothers and people suffering from high blood pressure or epilepsy should check with their doctors before drinking rosemary tea.

Rosemary is easy to propagate with cuttings from an established plant. Just snip off a two-inch cutting from the soft, new growth. Gently remove the leaves from the bottom inch and then dip that part into a rooting hormone. Next, place the dipped end into a container of dampened seed starting mix. Place the container in a warm spot that gets six to eight hours of indirect sunlight.

Make sure the soil does not dry out, and mist the cutting daily. In a few weeks, test for root growth by gently pulling on the cutting. Then transfer the new plant to a pot at least three-to-four inches in diameter. As the plant grows, pinch off the top of the cutting to encourage branch development.

In no time, you’ll have a new rosemary plant to enjoy indoors or outdoors.