Tricks To Extend The Kitchen Life Of Your Summer Vegetables 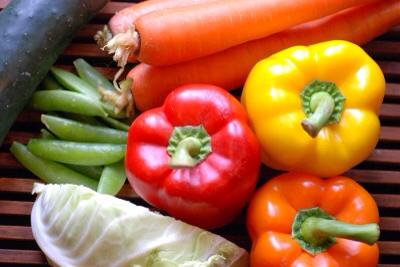 Fresh summer fruits and vegetables — every winter we long for them, and every summer we enjoy eating them raw and in our favorite salads, desserts and recipes. Yet, despite our best efforts, many of these tasty, nutritious foods are lost to spoilage.

The average American family throws away about a fourth of the food and beverages it purchases, according to a report by the National Resources Defense Council. Fresh fruits and vegetables are at the top of the list. If you have been putting too much of your fresh food in the trash or the compost bin, you may need a quick refresher course on how to store your produce.

First we’ll start with a few general tips: Store your fresh fruits and vegetables without washing. The moisture will cause them to mold and to decay more rapidly. Instead, wash them in running water right before you are ready to use them.

Be careful what you store together. Ethylene, a hydrocarbon gas produced by many fruits and vegetables, will actually damage other produce items. If one item is rotting and producing ethylene, the other fruit or vegetables around it will also begin producing more ethylene and will spoil faster. The following fruits and vegetables produce a lot of ethylene and should be kept away from other produce: apricots, avocados, bananas, cantaloupes, honeydew melons, kiwis, mangos, nectarines, papayas, peaches, pears, plums and tomatoes.

If you see that something is days from spoiling, take action. You can chop up items such as bell peppers, onions, broccoli, green beans, Brussels sprouts, eggplant, cucumbers, cabbage, celery, mushrooms, strawberries, blueberries and bananas and freeze them for later use.

You can blanch the cut produce in hot water before freezing. Blanching helps to preserve the vitamins and nutrients as well as their color and texture when freezing. Blanching also kills some bacteria. You can make soup stock with vegetable trimmings and ends that you won’t be using for your meals. Simply cover the pieces with water and simmer covered for several hours. Strain and store the liquid in your freezer for later use.


Cut the edible greens from items such as beets, radishes, carrots and kohlrabi before storing. The greens will drain moisture from the roots if left attached. Freeze chopped, unused herbs in water in ice-cube trays. They are great to take out later to use in soups. 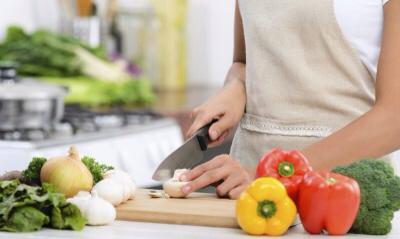 Now here are some particulars about certain fruits and veggies:


Berries: First, look for and remove any bruised or moldy berries from your batch. Store berries in the refrigerator unwashed in a well-ventilated container. Too many berries to eat? Frozen berries are great to use in smoothies! Pare them first to rid them of any stems or pits. Freeze in serving-size bags.

Celery: Wrap celery in a paper or cloth towel and store in the vegetable bin or in a plastic bag in the refrigerator up to two weeks. Freeze raw sliced or diced celery to use in soups and stews.


Corn on the cob: You can store unhusked corn in the vegetable bin or in an open bag in the refrigerator for up to two days. Since corn tastes best on the day it is picked, you may want to freeze it if you cannot use it then.

Cucumbers: Store cucumbers loose in the vegetable bin or a ventilated bag in the refrigerator for up to a week. Extend their use by chopping and freezing or by making into a relish with other veggies, such as cabbage, carrots, cauliflower, celery, peppers, tomatoes and onions.


Eggplant: Store your eggplant loose in the vegetable bin or in an open bag in the refrigerator for up to two days. Before freezing, pretreat eggplant for browning. Dip sliced or cubed eggplant in one quart of water mixed with 1/4 cup lemon juice or 1½ teaspoons vinegar and 1½ teaspoons salt. Drain well.


Leafy greens: Look for and discard any bruised or wilted leaves. Wrap unwashed leaves in a cloth or paper towel so that the towel can absorb any excess moisture. Then store your greens in open or ventilated bags in the refrigerator for up to two days for leafy greens and up to one week for lettuce heads. If your greens look wilted after being in the fridge or from being left on the counter, you can refresh them by placing them in a large bowl of ice water. Dry them gently in towels and serve.


Okra: Store okra in a brown paper bag or wrapped in a cloth towel in the vegetable bin of your refrigerator up to three days.


Snap beans: Wrap fresh beans in layers in paper or cloth towels in the vegetable bin or in a bag and store in the refrigerator up to five days.


Sweet bell peppers: Store peppers in the vegetable bin or in an open bag in the refrigerator up to one week.


Tomatoes: Keep your fresh tomatoes out of your refrigerator. Otherwise, they will lose their taste and texture in a hurry. Store your unripe tomatoes at room temperature until they are fully ripe. Keep them away from heat or direct sunlight, and move them around gently in the bowl to avoid bruising. Ripe tomatoes will keep for about a week.


Watermelon: According to the USDA, you can nearly double the beta-carotene and lycopene levels of watermelon by keeping it on your counter for a week rather than refrigerating it. You can chill it before eating. Do not store your watermelon near other produce as it is susceptible to ethylene exposure from other ripening fruits. Avoid purchasing pre-cut slices of melon as they will deteriorate faster.


Zucchini and summer squash: One of the reasons your neighbors are always giving away their zucchini is that it spoils fairly quickly. Store squash loose in the vegetable bin or in a bag in the refrigerator up to one week.


And, finally, although they are not summer fruits, here is a word about bananas. You can place ripe bananas safely in the fridge to prolong their freshness. The peel will turn an unsightly brown in just a few hours due to enzyme change, but the taste of the fruit will not be affected. If the color bothers you, you can minimize the color change by placing the ripe bananas in a sealed plastic bag in your refrigerator crisper.


Good luck keeping the fresh taste of summer going as long as you can.